The Power of Laughter in Facilitation: Seven Lessons

I was fortunate to hear Sophie Scott, director of the University College London’s Institute of Cognitive Neuroscience deliver a lecture on the neuroscience of laughter. Professor Scott, a self-acclaimed stand up scientist, presented an hilarious Seven Lessons of Laughter and Love at Chautauqua Institute.

The lessons she shared from research resonated with me on many levels, and particularly on the value of laughter in creating a positive state for overcoming conflict, tackling problems and seeking out creative solutions in facilitated events. Since my first forays into facilitation in the late 1990’s it’s been clear to me that a group that laughs together is more likely to problem solve together. I have found that the tensions of unfamiliarity dissolve, and a group is more likely to overcome differences and to seek enduring solutions to their problems. If I can help a group share a really good belly laugh before the first coffee break, the likelihood of a successful outcome increases. So, what are Professor Scott’s Seven Lessons:

Laughter is a non-verbal expression of emotion, like fear, anger, disgust. The physicality of laughter uses the same muscles of breathing that we control for speech and forces a single, large contraction of air causing the ‘Ha, ha, ha!’ The interesting thing is that the involuntary action of laughter takes evolutionary precedence over more essential life functions such as breathing and speaking. It seems laughter is more important than life!

Scott says we are 30 times more likely to laugh in someone else’s company than alone. It is a primed behaviour. It is emotional, and has an inherent communal character. “Laughter is communicative.  Laughter is never neutral. Laughter’s always meaningful.”

We are more likely to laugh if we are already laughing. Laughter is contagious. Like yawning, coughing and blinking.

Babies don’t start to laugh until around three to four months. Even before they have communication skills, they use laughter to reach out and to express themselves. Children use their parents’ reactions as cues for laughter or not. There is a biological predisposition to contagious laughter; although children need models for it to develop. Paradoxically it seems our education system and culture ‘teaches’ laughter out of us; babies laugh about 400 times a day while the typical adult laughs only 15 times on average.

Although we do laugh at jokes and humourous stories, laughter is more often used as a ‘social bonding’ mechanism. We laugh as a signal of familiarity, friendship, agreement, support or understanding. Scott says it is an “extremely nuanced way to do a lot of the emotional work of a conversation”. It can cover up negative emotions such as anger and sadness, and is used to express positive feelings and collaboration. 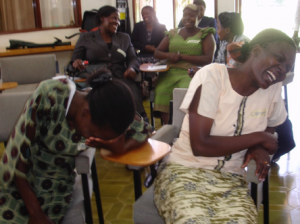 Laughter is an important signal of affection and affiliation. It’s a very sophisticated behaviour that makes interactions go more smoothly. It helps us discuss sensitive topics, and helps diffuse uncomfortable situations. It can help us feel better in close relationships and can help us negotiate out of unpleasant emotional states into more positive ones. Unlike other emotional behavioural regulators like anger and dominance, “laughter is a very safe emotional place to be”. However, Scott says that laughter is indicative of an existing relationship and not transformative. She also says that laughter says more about ourselves than the other: our willingness to laugh and to extend that signal of inclusion, affirmation, or affection.

Laughter is “an incredibly ancient and inclusive bond”. It’s a real sign of closeness and meaningfulness in a relationship.

The photograph above shows women helpless in laughter by the challenge of a simple blindfold exercise. The women from Kibera, Nairobi, one of the largest ‘informal settlements’ or slums in the world were candidates of a micro financing project struggling with the demands of single motherhood, many of whom requiring significant medical support for themselves and their children. They approached the workshop with a certain level of suspicion and competition about one another’s business initiatives, but with an underlying desire to have more trusting relationships with one another so that they would find support from one another if a child had to be taken to a clinic or, when they themselves had to be absent to follow her own medical treatments. These ladies expressed a range of commercial, personal and tribal tensions that underpinned their suspicious motivations. After a day of laughter and disclosure of common fears and concerns, bonds were formed that initiated a sense of sisterhood and camaraderie. The religious leader who accompanied them on the day was delirious with joy, and confident that a trust was developed that could overcome their initial fears and rivalries.

How can you do it?

Studies at Wharton Business School indicate that when groups are primed to laugh they are more flexible, creative and successful in their decision making – even when it is forced laughter. In your agenda design and provide opportunities for people to share stories that can create humour. They don’t have to be about a joke or even be intentionally funny. When I provide a safe place to share embarrassing, bizarre or amazing experiences, I am surprised every time by the energy that laughter generates in the group. A good laugh makes you lose control, uses your stomach to the point of pain, releases endorphins, relieves muscle tension, lowers blood pressure and can even stimulate the production of white blood cells. Help the group laugh with each other, not at each other. You can ask “What is the most embarrassing thing I could do in your culture? Help me avoid embarrassing myself if I am invited to your home/office. Diverse practices then can become common ground about our intention to respect our respective cultures and not insult them. I have found that most groups willingly cooperate when there is some link to a message, a concept, a principle we are struggling with. I also find that someone in the group sees that link and often highlights others that I have not yet connected with, and this gives added meaning and purpose to the activity.

If you haven’t already done so, suggest diverse media for expressing reflections and differences, desires, goals, and learning. I have witnessed examples of songs, poems, dances, games, pictures, skits, all of which created laughter and astounded me by the depth of reflection and insight.

Don’t think you need to do it yourself. Be prepared to ask the group to respond and create. Your job is not to be funny. Your job is to ensure a safe, respectful environment in which the laughter can occur. And it will be contagious; and it might temporarily take over the process and even breathing; it will create meaning; it will cover up embarrassment and provide safe haven; it will provide timely sustenance and diffuse other negative emotional states. It will create bonds that encourage the group let go of entrenched differences and to seek common solutions. And it will be fun!