What do we mean by courage: When have you been courageous as a facilitator? 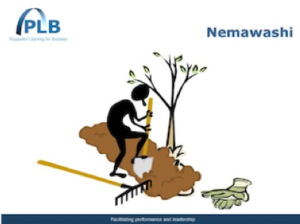 You’ve got to get a challenging group loosened up. You’d planned an informal light-hearted ‘icebreaker’. Suddenly your confidence wanes, your centre dissolves, the uncertainty creates a sick feeling in the pit of your stomach. Do you go ahead with the activity or don’t you?

Ever had this experience? You had planned to do something then get in front of the group and second guess yourself… they’re too old…they’re too young… too formal… too informal… too technical… too urban… too rural… too whatever.

I’ve faced this situation several times and the one or two times I backed down, I regretted it and I believe the meeting suffered because of it. On the times I decided to go ahead, grit my teeth and trust the courage of my convictions, I was rewarded by the successful conclusion of the meeting.

One of those convictions is that I truly believe in the power of investing time up front in helping a group get to know one another better and in establishing what I refer to as ‘Nemawashi’. Nemawashi in its traditional Japanese business interpretations is the practice of seeding agreement with members of a decision making group before a meeting. Senior managers in Japan did not want to be presented with new ideas for the first time in a meeting and have to face transparent disagreements, so much of the lobbying and persuasion happened before the actual meeting. It can be disconcerting to Westerners who expect to see issues explored openly in the meeting. Younger Japanese colleagues tell me that this practice is being replaced by more open collaboration.

My interpretation of ‘nemawashi’ comes from its literal use in gardening. It actually means ‘digging around the roots to prepare a tree for transplant’. And the image for me is that of loosening preconceived notions, approaches, and thinking styles that can limit a person’s perceptions, and prevent them from being open to others thoughts and  ideas.

To do this effectively takes time, and it requires that groups get much more personal with one another which comes back to the courage. The level of disclosure and informality required to establish positive emotional state and receptivity is often more than many groups think they are ready for or are willing to invest time in. Successful ‘nemawashi’ can help build the necessary environment for what I call ‘creative abrasion’. Creative abrasion welcomes differences as part of a healthy problem solving process.

How many times have you had push back from a client or the group about not wanting to do ‘fuzzy ice-breakers’ – and how many times later in the meeting have you wished you’d spent more time heading off potential abrasions between people or ideas. Of course you have to have the right activity (not all are fuzzy!)  designed according to the groups familiarity with one another and the topic, you have to have considered their previous experiences, and taken note of any cultural considerations. Assuming you’ve done all of that…Have the courage of your conviction and stick to your course.